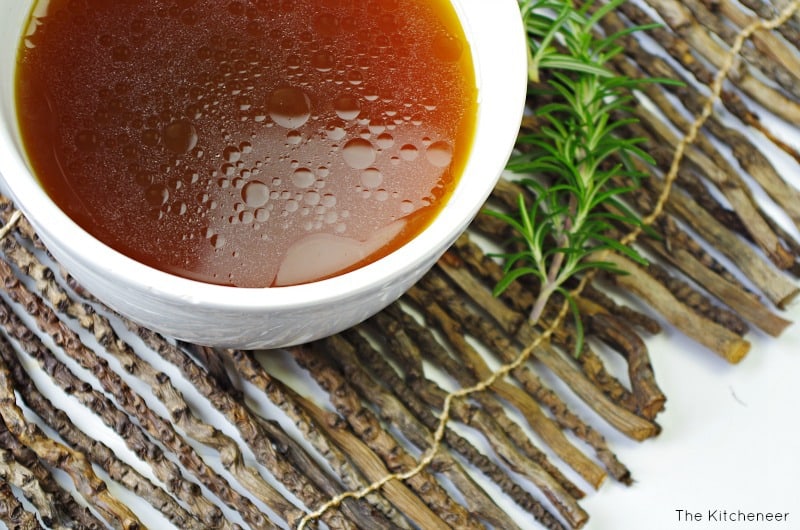 If any of you out there follow the world of food trends, you might have the term “bone broth” tossed in the mix. And it might have made you cringe or you might have been curious. Bone Broth is something that I have been wanting to make for a while now but always held back. Why? Don’t know. I guess I didn’t do enough research as to why I should. I have used it in my beef stew before and it was absolutely delicious. 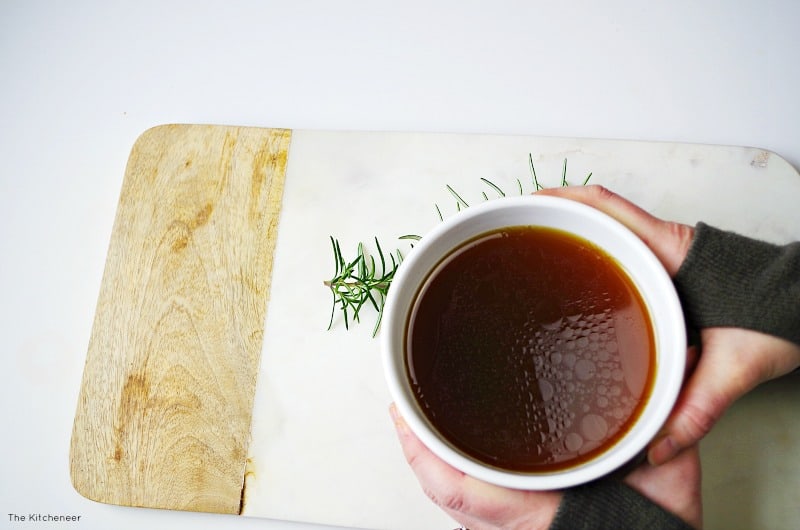 You can’t discard the nutritional benefits

Bone broth is made by slowly soaking soup bones from any animal for a long period of time. The bones you use are important and should still have some meat attached to it. Why? Because that is the difference between a normal chicken broth vs a bone broth. A chicken broth uses some bones that are cooked for maybe a few hours and is very light in flavor and nutrition. Bone broth slow cooks for about 24 hours and with the added apple cider vinegar (which helps extract the collagen from the bones) becomes something magical.

“Proline and glycine are important for a healthy gut and digestion, muscle repair and growth, a balanced nervous system, and strong immune system. In fact, a study of chicken broth conducted by the University of Nebraska Medical Center found that the amino acids that were produced when making chicken stock reduced inflammation in the respiratory system and improved digestion. (There’s a reason your mom always made you chicken soup when you were sick.)

The gelatin in bone broth can help to heal a leaky gut, which may be of specific benefit those with inflammatory or autoimmune disorders. These compounds also reduce joint pain, reduce inflammation, prevent bone loss, and build healthy skin, hair, and nails.” – Whole30.com

Bone broth also contains glucosamine. This helps with joint or arthritis pains. Maybe try a more natural approach to get your glucosamine instead of paying big bucks for the supplement.

You can’t buy it at the store. They don’t sell it there. And don’t believe the cartons that claim they are the real deal. They are watered down and don’t have much flavor. They are ok to use in small amounts but won’t have the healing properties of the real thing. 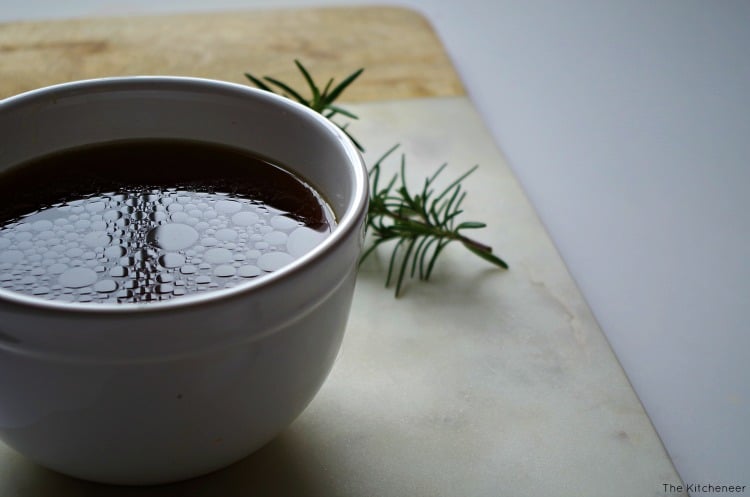 You can pick up bones at your local butcher for around $2/pound!

And that rotisserie chicken you just ate and picked clean? Save it! Use the carcass as the base for your next batch of bone broth!

Have a mug of it in the morning to sip. I know, sounds weird but it’s actually really good!

Use it in any soup. Just substitute bone broth for stock or broth in the recipe.

Use it to braise meat 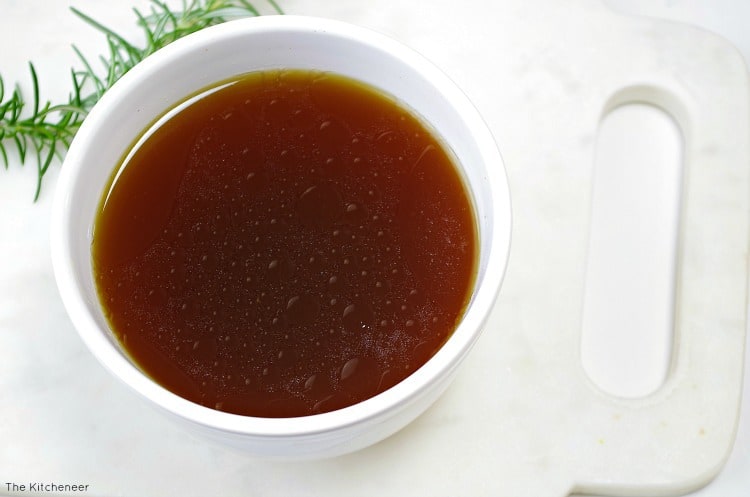 Pour into an ice cube tray. Once frozen pour into a freezer gallon bag to use for later. I cube = 1 oz so 2 oz= ¼ cup Do the math and you can throw it into a mug or soup bowl for later. Keeps for 6 months! You may also store larger quantities in glass mason jars. Just ensure that the broth is cooled completely before pouring into the jars and storing it.

Making bone broth has become a lost art in our culinary world. All throughout the world for hundreds of year’s chefs and home cooks alike have reaped the benefits of making their own broth at home. Can we make making our own broth the new 2016 trend?

Bone Broth is a warm mug of healing that contains minerals, collagen, and natural gelatin to help repair muscles, aids your immune system, and helps your skin. Try to drink around 8 oz a day for maximum benefits. 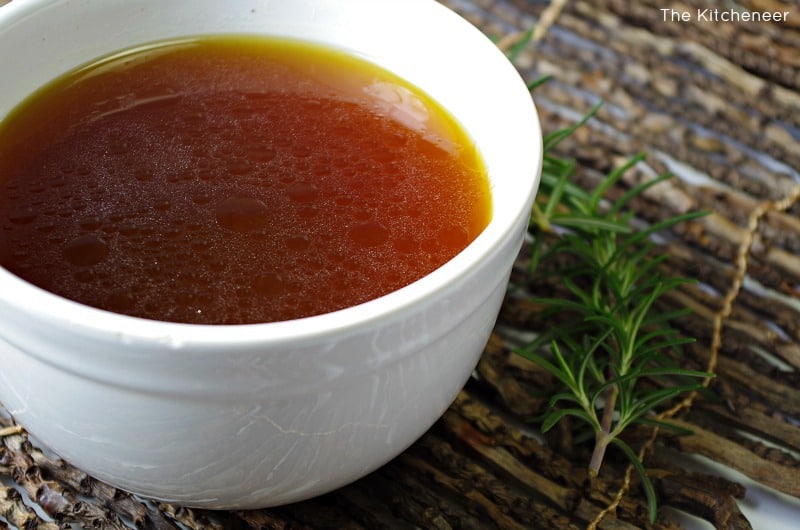 Pour water into a large crockpot

Add bones and all other ingredients 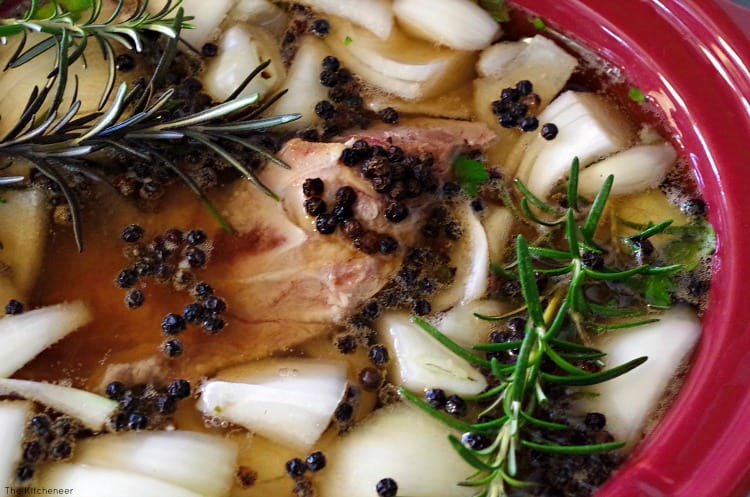 Let cook on low for 14-24 hours. The longer it cooks the better the flavor

Strain through a fine mesh and discard waste

Serve warm or save it for some soup later!

Tip- you can save the bones for another batch or two! Just discard the veggies and everything else! And repeat this recipe!

Note- due to the gelatin in this broth, you make notice it will resemble Jell-O after sitting in the fridge. Don’t worry that is normal. Just heat it up and stir until it returns to it’s liquid form